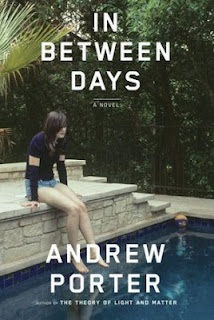 A couple of years ago, I (Liz) discovered a short story collection called A Theory of Light and Matter by Andrew Porter.  I was hooked.  In Theory, I discovered an incredible writer, an old school writer in the best sense.  It didn't hurt at all when I learned that the author lived in Texas, and that one of my publishers, Vintage, picked up the paperback rights to Theory.  Jump forward a year, to sales conference and a dinner with editors at which I sat beside Andrew Porter's editor.  She began to tell me about the novel Knopf would be publishing, and I was bouncing around giddily (if internally).  That novel, In Between Days, lived up to my expectations.  Set in Houston and centered on a family in crisis, it's a marvel of a classic, literary novel--wonderful prose, well-written characters, and a gripping plot.  The parents have split after years of marriage, and their older child has just graduated from college and is searching for himself and his voice as a writer.  His younger sister, Chloe, has been in college in the Northeast, but she is sent home from school and isn't talking about the reasons.  Her arrival sets the novel in motion.  In Between Days went on sale this week, so now seemed like the perfect time to submit Andrew Porter to our horrible questions (might as well harass 'em before they are too big for us and they realize they can say no, right?).

1. You won the Flannery O’Connor Prize for Short Fiction for your short story collection, The Theory of Light and Matter. What exactly is the prize? Did you win a peacock? What’d you name your peacock?
No, I didn’t get a peacock, but I got the next best thing. After winning the award, the University of Georgia Press (who sponsor the contest) flew me to Flannery O’Connor’s hometown of Milledgeville, Georgia to give a reading and visit her farm. The property itself is enormous and pretty amazing. You can see the barn where that famous scene in “Good Country People” takes place, the small house where the immigrant couple in “The Displaced Person” lived, and, of course, you can also see a bunch of peacocks! [...So...you stole the peacock?  That's excellent.]

2. Describe your literary odyssey—how did you become a writer?
Well, that’s probably too long a story to tell in detail here, so I’ll give you the short version. Like a lot of writers, I caught the writing bug in a college fiction workshop. Soon after, I abandoned my dreams of becoming a filmmaker, pursued an MFA at the University of Iowa, and then spent the next eight years or so looking for ways to support myself financially (mostly through teaching) while I finished my first book. It’s not an uncommon path these days, and it certainly wasn’t an easy path, but that’s the one I took.

3. I’ve never read _____________ and I’m so ashamed.
The Road by Cormac McCarthy. My students reference this book constantly in class, and I always feel embarrassed that I haven’t read it. I know it’s a short book, and having read a lot of his other novels, there’s really no excuse other than the fact that I have an eleventh-month-old daughter now and not nearly enough time to read.

5. Your new novel, In Between Days, is set in the Houston neighborhood of Montrose. What is your connection to Houston and this neighborhood?
I lived in the Montrose area of Houston for one year on two separate occasions in the late ‘90s. I have a deep affinity for that area of Houston, in particular, and still think of my time there, and the city in general, very fondly.

6. On a sales call, we heard from your editor something to the effect that you actually lost your work and gave up writing for awhile (sorry I’m fuzzy on the details—it’s been months since I heard the story). Tell us about it?
During my second year in Houston, my apartment was robbed, my computer and back-up disks were stolen, and I lost the vast majority of everything I’d written up until that point in my life, including a nearly completed manuscript of my first book. I came very close to throwing in the towel at that point, but fortunately stuck with it and (eight years later) finally published my first book. [Recently my house was burgled and the thief/thieves ignored everything except my TV and Wii.  Did you have a note on your computer case that said "the good stuff's in here?"  I'm insulted that my thieves ignored my books and such.]

7. You teach at Trinity University in San Antonio. Liz attended Southwestern University in Georgetown. The two schools are rivals to the extent that Division III schools can be rivals. Why does Trinity suck so much?
Well, for Liz’s sake, I wish I could say that it does, but the truth is I’ve loved every minute I’ve spent at Trinity. Sorry, Liz! [I'm reworking my best book of the year list based entirely on this answer.]

8. The action in In Between Days is set in motion when the daughter of a family is sent home from college under mysterious circumstances. Did you start writing knowing what the issue would be, or did it come to you while in the process of developing the characters?
I actually made a conscious decision not to decide why Chloe was sent home from college until I was about ¾ of the way through the novel. I figured that if I knew the answer to this question I’d inadvertently give it away to the reader, so, the truth is, the moment the reader finds out what happened at her college is the same moment I found out myself.

9. Liz or Gianna? (This is a question we ask everyone, and the catch is that there is a correct answer. Choose wisely. Imagine you’re Indiana Jones and one of us is your Holy Grail.)
That’s like asking me to choose Lennon or McCartney, Gilbert or Sullivan, Bogie or Bacall. Can we call it a tie? [No.  The correct answer is always "Liz."  You have chosen poorly.]

10. What book(s) changed your life?
Where I’m Calling From (the collected stories of Raymond Carver), The Collected Stories of John Cheever, Flannery O’Connor’s A Good Man Is Hard to Find, Crime and Punishment, Drown by Junot Diaz, The Coast of Chicago by Stuart Dybek, and, most recently, all of Maile Meloy’s books. [We love everything about this list!]

11. What book do you think is woefully under-read, and why?
One of my all-time favorite short story collections is Sweet Talk by Stephanie Vaughn. For over a decade it was out of print, but fortunately it was republished last February by Other Press. Everyone who loves short stories should read that book! [And this is a great pick.  Are you trying to make up for liking Trinity?]

12. What do you think distinguishes Houston as a setting for stories?
Personally, I’ve always been fascinated with the history of Houston, in particular the oil boom of the late ‘70s and early ‘80s and of course the subsequent crash. I think the prosperity and tragedy of those years really defined the city in certain ways and also greatly affected many of the people who lived through them. So, as a backdrop for fiction, Houston (and that period of time in particular) has always appealed to me. On top of that, I think the city, in general, is incredibly diverse, and as a fiction writer that gives you a lot of freedom to explore a lot of different types of characters from different cultural and socio-economic backgrounds living in pretty close proximity to each other. Of course, there are many other reasons, but those are just a few.

13. On a scale of 1 to 10, with 1 being “I don’t follow baseball and therefore don’t understand the question” and 10 being “I’m so outraged that I’m in the midst of a hunger strike,” how upset are you about the Astros’ switch to the American League next year? (We’re big baseball fans, so we often ask baseball related questions. Gianna roots for the Cubs and therefore will be in therapy for many, many years trying to come to terms with her unending disappoint, and Liz is a lifelong Astros fan.)
Though I’m a lifelong Pirates fan, and therefore (like Gianna) constantly heartbroken, I do have a fondness for the Astros and strongly believe they should stay in the National League. So I’ll say an “8.” [According to our scale, 8 equates to "Bud Selig is the Anti-Christ."  That's acceptable.]

14. What are you working on presently? Care to give us a sneak peak? I (Liz) am your number one fan! Misery references are deliberate, Mr. Man.
I’d love to give you a sneak peak, but everything I’m working on right now is pretty rough. To be more specific, though, I have the beginnings of a new novel project and also a couple of new short stories in the works.

Thanks so much for the questions and your interest in my work. This has been a lot of fun!

Thank you!  Texas people--Andrew Porter is going to be reading and signing at BookPeople in Austin on Monday, September 10, at Brazos Bookstore in Houston on September 12, and at The Twig Bookshop in San Antonio on September 22.  We don't think it would be inappropriate to dust off the VW van and follow him around like he's the Grateful Dead.  I'm sure he likes tie-dye.
Posted by Liz at 10:32 AM

Email ThisBlogThis!Share to TwitterShare to FacebookShare to Pinterest
Labels: A Theory of Light and Matter, Andrew Porter, BookPeople, Brazos Bookstore, Flannery O'Connor, Generally Horrible Questions, In Between Days, The Road, The Twig Bookshop