Sale Conference, More Awkwardness from the Land of the Socially Inept 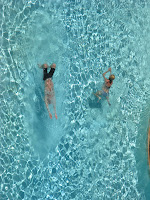 Liz again here.  I returned from Florida and the Random House sales conference late on Sunday, and then have tried to recover and soothe the raving, blood-thirty beast (the cat).  Gianna says that I should post some more thoughts about sales conference.  I'm too scared of her not to follow her directions.

Here's an early tease for a book coming out this fall:

Andrew Porter teaches at Trinity University in San Antonio, and though Trinity is the hated rival of my alma mater, Southwestern University, I set aside petty rivalries of liberal arts institutions with Division III NCAA status (no scholarship athletes) for local authors.  Andrew wrote a brilliant short story collection, The Theory of Light and Matter, a couple of years ago, which ended up winning the Flannery O'Connor Award.  Now he's delivered his first novel, In Between Days.

In Between Days echoes John Cheever or Richard Yates, and I mean that as the highest compliment.  Much fiction these days either is post-apocalyptic or else off-putting-ly clever (clever for the sake of cleverness), and while I admire some narrative manipulation, it can also become tiresome.  Andrew Porter simply writes beautiful sentences about normal people in normal times...if one can claim that these are normal times.  His novel is set in Houston and is centered on a family coming apart.  The father, Elson Harding, an architect, has divorced his wife of 30 years, Cadence.  Their son Richard is adrift, still living at home after graduating from college and dabbling at writing poetry.  He's full of angst, naturally.  Their daughter Chloe suddenly has to come home from her East Coast college, though, and the circumstances around her arrival pitch the family into turmoil.  There's a tension here, as well as an attention to detail without getting lost in the details, that makes In Between Days one of my favorite upcoming novels.  I know it's very early, but jot down this title for the fall.  You'll thank me.

That's it from Florida, but here's one last picture for you: